Our analysis of the referendum results indicates that the two main pillars the AK Party has thus far relied on - economic development and identity politics - will no longer be valid. Despite his victory, the rise of the new middle-class poses a unique challenge to President Erdogan. He now has two main options.

The constitutional amendments that transform Turkey from parliamentarian to presidential system has been approved by the 51 percent of the Turkish people on April 16, with an electoral turnout of 84 percent. The opposition parties now request recounts due to the last-minute decision by the High Election Board to accept ballots without official stamps. The preliminary report of the Organization for Security and Cooperation in Europe (OSCE) also indicates the irregularities observed during the referendum campaign. In any case, the outcome means a narrow victory for President Erdogan. He will now have to win another election in November 2019, if not earlier, to fully assume his powers.

StratejiCo. has noted before the three main issues that businesses should watch within the next few years as the institutional transformation, structural reforms, and international rebalancing, regardless of the referendum’s outcome. We now would like to take a longer view of what the outcome means for Turkey’s political landscape.

The AK Party came to power in 2002 and won the majority in all general and local elections, as well as three referenda since then. The overwhelming majority of Turkish people has supported the AK Party and its leader Erdogan for two main reasons.

First, the single party rule of the AK Party came as a relief after many years of unstable coalition governments, which resulted in the financial crisis in 2001. As the graph below demonstrates, rapid economic growth and increase in GDP per capita were a central driver of Erdogan’s march toward increasing his political power. 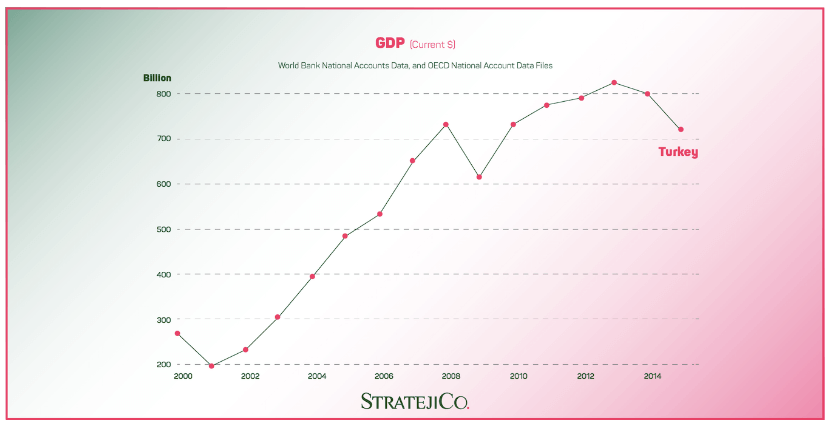 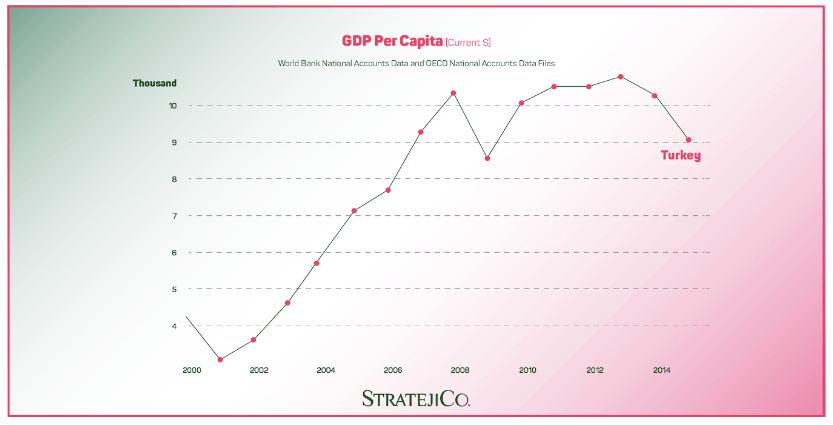 More importantly, the AK Party pursued a very careful strategy of coming to an understanding with the secular bourgeoisie of Istanbul, while raising its own religiously conservative business class in Anatolia. Consequently, the towns such as Konya, Kayseri, Gaziantep became AK Party’s stronghold by increasing their share in the economy.

Economy, however, has never been the only pillar of the AK Party’s electoral success. The identity politics has also played a significant role. The party and its powerful leader Erdogan continuously appealed to the part of the Turkish population that felt dismissed by country’s secularist establishment for many decades. The sense of “common identity” was so strong that it crossed many factions of the society, including the Kurds. The model below demonstrates the main fault lines that define Turkey’s identity politics and the large room to maneuver that AK Party enjoyed since 2002. (Like all models, the one below simplifies the complexity of the reality. However, we believe it’s helpful for our understanding.) 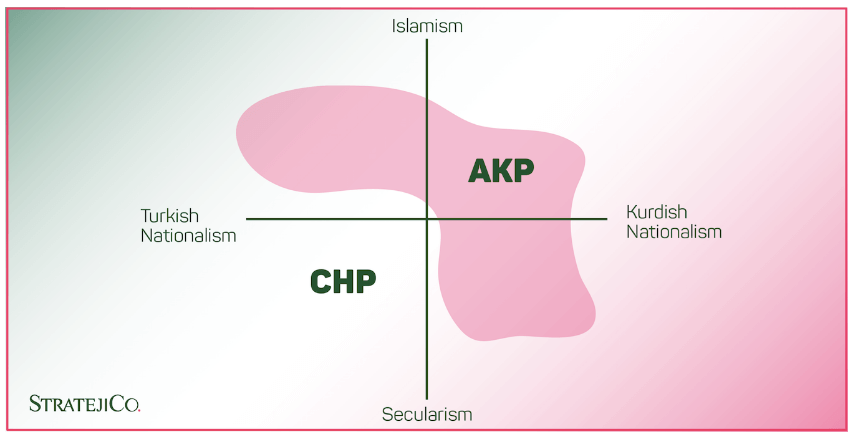 What this model shows us that the AK Party had a unique opportunity to appeal to almost all segments of the society, except for the secularist-nationalist faction that supports the main opposition CHP. Moreover, President Erdogan has achieved tremendous success by identifying the “sense of us” with his personality. In other words, for millions of his voters, criticizing Erdogan meant assaulting their own identity.

Our analysis of the referendum results indicates that the two main pillars that the AK Party and Erdogan have thus far relied on, namely economic development and identity politics, will no longer be valid in the future.

First, there are already signs of stagnation in Turkey’s economy. The GDP per capita has remained the same since 2010, indicating that Turkey remains in the middle-income trap. The official unemployment rate has reached 13 percent, while one out of four persons under the age of 25 is unemployed. In the meantime, inflation has reached 12 percent despite the increase in interest rates since the beginning of 2017. In brief, Turkey is now forced to embrace a reformist agenda if the government wants to change this course.

Second, the No camp in the referendum has blurred the lines of identity divisions. It included the secularist-Turkish nationalists (People’s Republican Party-CHP), conservative-Turkish nationalists (Nationalist Movement Party – MHP), secularist-Kurdish nationalists (People’s Democratic Party – HDP) and even some parts of the religious conservatives that traditionally vote for the AK Party. Obviously, this does not mean that they share the same political ideology and would vote for the same political party in a general election. However, identity differences did not undermine the 49 percent bloc, for the first time.

The referendum map below demonstrates where Yes and No camps won the majority. 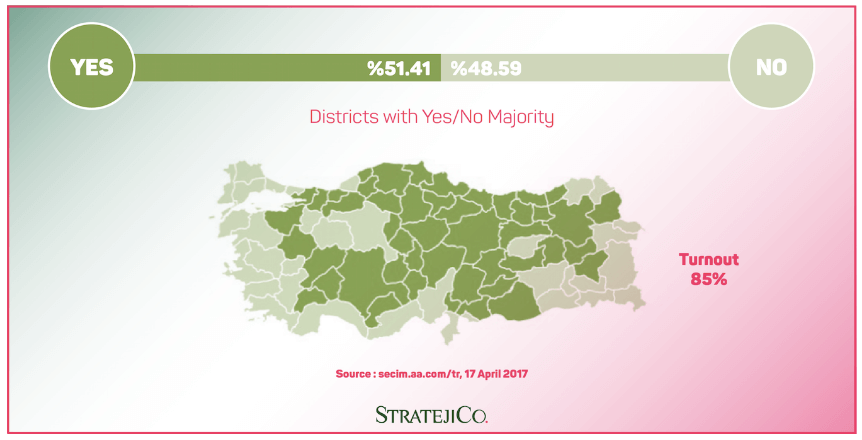 What this map tells us is quite significant.

The Rise of the New Middle-Class and Erdogan’s Choice

So, what do these results mean? What we see in this map is quite clear: a new middle-class is emerging in Turkey. This new middle class has political and economic demands that cannot be met with past policies. The urban and educated segment of the Turkish society requests higher life standards, economic predictability, and political stability. These requests are not dependent on their identities or political party affiliations.

The rise of this new middle class poses a challenge for the AK Party and Erdogan, both from the economic development and identity politics perspectives. The President has now two main options. First, he can try to accommodate with this trend by pursuing a liberal policy that means implementing a reform agenda, fixing the ties with the European Union and seeking compromise with the other half of the society. Second, he may opt for the populist option and implement more protectionist policies, which could mean an increase in tension with the EU and further social polarization.

Not only Turkey but the world is going through the VUCA period. The system will try to balance itself after each seesaw.  Only time can tell which path Turkey’s even more powerful President will choose. The indicators are there to watch.