WHAT IS SCRUM? WHAT DOES SCRUM MASTER DO?

Max Planck won the Nobel Prize for Physics in 1928, and upon winning he was invited to many universities to give lecture on quantum physics. He made the same presentation at every university. One day,  his chauffeur offered him to switch roles: he would give the lecture, and Planck would listen to him sitting in the first row. After all, Planck was giving the same lecture everywhere, and his chauffeur memorised everything. Eventually, the chauffeur delivers the exact same presentation but cannot answer a question directed by a student. The distinction between Max Planck knowledge and chauffeur knowledge arises from this story. When we internalise the knowledge, then it becomes Max Planck knowledge[1].

In this article, we will explain what the Scrum framework is and which responsibilities a Scrum Master takes over under this framework. Thus, we can transform from a chauffeur into Max Planck and be able to put our knowledge into action.

We are sure that anyone adopted an Agile approach to their organisation is familiar with the word Scrum. Scrum first appeared in the article ‘The New New Product Development Game’ written by Hirotaka Takeuchi ve Ikujiro Nonaka in 1986. In the ever-changing world, the rules for new product development have changed with the flexible and concurrent work of multi-disciplinary teams. Takeuchi and Nonaka called the corresponding framework as Scrum. Later in 2001, Jeff Sutherland and Ken Schwaber have defined Agile approach in their Agile Manifest, and Scrum was described as a part of that approach.

In its shortest and simplest definition, Scrum is the framework used to develop complicated products, to deliver them to customers and to sustain them[2]. What evoked in your mind with this definition? It resembles many other frameworks, does not it? What differentiates Scrum from others is its learn-by-doing culture and its small team that is resilient against changes.

But how is this culture ensured?

We start by breaking up a great objective into its small pieces. Within generally two weeks of development phases -which we call Sprints-, Scrum team completes a piece of the project at the end of each Sprint. Collaboratively, at the beginning of each Sprint, we decide upon which piece to complete next, and that’s how Sprints follow one another. Be careful, a Sprint cannot last longer than one month.

While our Scrum team comes together within predetermined time intervals, the development team - the ones that are going to do the actual work - can organise daily Sprints. The whole team runs after the Sprint goal, whereas the development team sets daily goals and tries to achieve them. But all of us try to achieve the goal in the promised time span that was set at the beginning of the Sprint.

The below infographic demonstrates the Scrum framework excellently without defining the roles in the team. In the Product Backlog, we keep the main goal of the project and the necessary actions to reach this goal. For every Sprint, we determine a relatively smaller, but primary goal and tasks to be completed during that Sprint which we keep in the Sprint Backlog. Do not forget: we have to complete all of these within the time span we all agreed upon.

At the end of each Sprint, we as the Scrum team come together to review which of the work we can mark as ‘Done’. The goals achieved and marked as Done are now called product increments. In this review process, we also discuss what went well or bad. The next steps for the upcoming Sprint can be determined during the review as well. We end the review by updating the Product Backlog. Now, it is ready for the next Sprint. 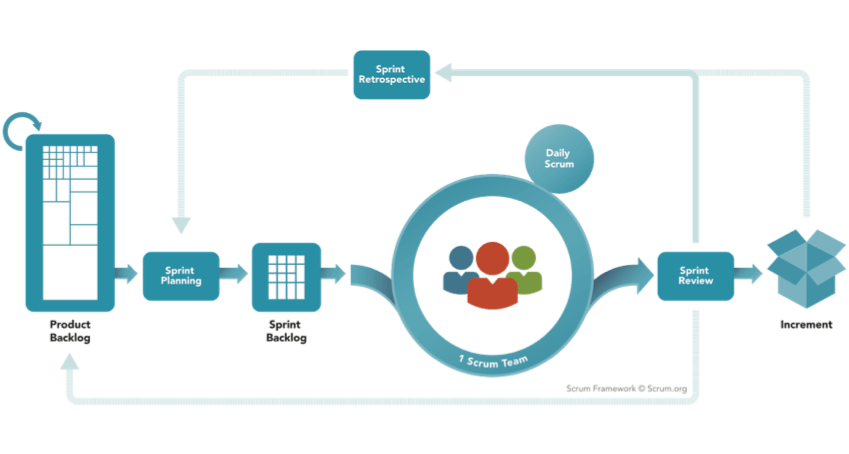 At the end of each Sprint, we as the Scrum team come together to review which of the work we can mark as ‘Done’. The goals achieved and marked as Done are now called product increments. In this review process, we also discuss what went well or bad. The next steps for the upcoming Sprint can be determined during the review as well. We end the review by updating the Product Backlog. Now, it is ready for the next Sprint.

Another step that can run concurrently with or after the review is the Sprint Retrospective. In the review phase, we critiqued the quality of the work done. What’s different in the retrospective is that we detect good sides and improvement areas in the process and the relationships among team members. It is important for us that the team gets along well. Our aim is to improve the way of doing business and at the end of the day to improve the quality of work.

Although the Scrum framework has no sharp edges, it follows a similar outline as depicted above. Whether this framework can function well depends on a self-organising team that is willing to take initiatives.

What is a Scrum Team?

The Scrum Team consists of a Product Owner, a Scrum Master, and the Development Team.

Product Owner: As the name already tells, the Product Owner is the owner of the project. She/he is the person that sets the Product Backlog and ensures that the objectives are understood by the rest of the team. At the same time, she/he has both the decision authority and financial resources to sponsor the project.

Scrum Master: The person that ensures everyone in the team has a good command of Scrum principles and follow these principles. In short, we can say that the Scrum Master is the embodiment of ‘servant leadership’. She/he takes the role of enabler.

If the Product Owner makes the decisions and the work is done by the Development Team, what does actually the Scrum Master do?

As the name indicates, Scrum Master has excellent knowledge of the Scrum Framework and the ability to coach the team. The Master assures the transparent flow and coordination among team members.

To Product Owner; Scrum Master helps with arranging the Product Backlog, alignment of the team with business objectives, and if necessary, with the management of Scrum activities. To the Development Team; Master assists with self-organisation and becoming more Agile, helps with overcoming barriers and creating value-added products. In the organisation, Scrum Master takes over the responsibility of a leader in scaling Scrum frameworks, and of an enabler that empowers productivity.

Scrum, by its nature, fosters ‘learn by doing’. It is one of the most effective frameworks that can respond to the complex world we live in today. It is challenging to apply, but worth the effort. If you are going to apply Scrum in your organisation, make sure that there is someone competent with Scrum in your team. Otherwise, we advise you to get consult an expert.